The following activity helps participants learn the reasons why they may have a difficult time concentrating by playing a game similar to “Password” to identify things that hinder concentration. 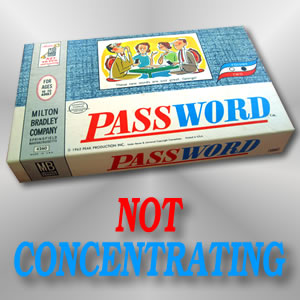 The participants will understand reasons for the inability to concentrate.

Step 1: Select five players. Make two teams with two players each. The fifth player will act as referee. Each team will try to identify the same word based upon one-word clues.

The person giving the clues on Team A will start by giving a one-word clue to his teammate. The teammate will try to identify the word. For example: the word may be “worry.” The person giving the clue may say, “Distressed” whereupon the player guessing the word may say, “Worry.” If the correct word is given, that team wins and receives one point. If the word is incorrectly guessed, Team B will have a chance to guess the mystery word in the same manner. When Team B misses a clue, Team A will have another chance, and so on.

After each team guesses a word, ask the class to discuss why that item is detrimental to concentration.

Allow as many rounds as possible to be played as time permits.

The following list are reasons for the inability to concentrate:

Step 2: If time runs out and all the mystery words have not been used, select the team with the highest score to do a lightening round where the remaining mystery words will be guessed one at a time in a 20-second time limit. For example: the person giving the clues will have several word cards and will show the cards one at a time to his/her teammate, who will give an answer as quickly as possible. If the answer is incorrect, the person giving the clues has the option of giving another one-word clue or going on to the next word. Time is of the essence in this portion of the game. After each team guesses a word, ask the class to discuss why that reason makes it difficult to concentrate.

A. How is concentration a big part of remembering? Answers may include:

B. What one single thing hinders your ability to concentrate? Answers may include: Television, disinterest, etc.

C. What can you do to eliminate the things that hinder your ability to concentrate?